In weekly meetings throughout the hot summer months, water managers in the Yampa Valley largely rely on precipitation predictions to make decisions. They use this information to forecast flows in the Yampa River and weigh if they should make environmental releases or if water would be better saved for later. 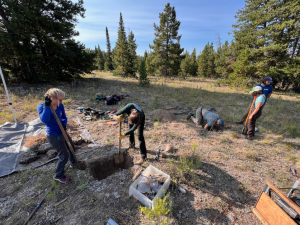 “But we don’t always get it right,” said Andy Rossi, general manager of the Upper Yampa Water Conservancy District. “We don’t have a great understanding, especially in the upper basin, of what the streamflow-precipitation relationship is from year to year.”

That relationship generally amounts to how much of that precipitation makes it into the river, and how much of it is soaked into the ground amid decades-long drought. While last winter’s snowpack was somewhat close to average, the runoff was significantly depleted — roughly 30% average.

Soil moisture is the measurement many researchers believe is missing, and a new climate measurement station perched on private land just southwest of Stagecoach Reservoir hopes to help fill the data gap.

“It is another variable that we’re understanding is more and more important,” said Madison Muxworthy, soil moisture, water and snow program coordinator for the Yampa Valley Sustainability Council.

The station — paid for by the Upper Yampa District and installed in partnership with the sustainability council and the Center for Western Weather and Water Extremes — includes a soil moisture monitor that takes measurements at six different depths down to 40 inches. It’s the first of a network of 25 similar stations planned for the Yampa Valley.

Rossi said the station will be an important tool when making decisions that have shrinking margins for error amid climate change.

“Brad Udall said it best, this might be as cool as it gets for the next 10 years,” Rossi said, referencing the Colorado State University climate scientist who no longer calls the current 22-year dry period a drought, instead using the term aridification, or the gradual change from a wetter to drier climate.

“Before … the system wasn’t as stressed,” Rossi continued. “Now we’re at a tipping point where the system was stressed enough where we need better information, because do you release water or not makes a big difference.”

The station was installed in the middle of September, and Muxworthy said it generally takes about three months for everything to settle. It will likely take another decade to have enough soil moisture data to have a good understanding of that soil-runoff relationship, she added.

But the station is taking measurements every two minutes and updating data every hour. Soil moisture measurements are taken at 2, 4, 6, 8, 20 and 40 inches, which shows how deep moisture from precipitation is soaking into the ground.

Rossi pointed to data collected earlier this month, when the valley got some rain. While the shallower depths showed a significant change after the rain, it barely had an impact 20 inches deep and 40 inches saw no change at all.

The rain and increased soil moisture near the surface led Rossi to suspect that Morrison Creek likely saw an increase in streamflows at that time too. When checking data with the U.S. Geological Survey, flows did see a temporary spike.

“We see the spike, but until we have a longer period of record on the soil monitor, we don’t know it this was a diminished response,” Rossi said. “Is the soil not soaking it up and it’s just going down (into the river) or is the soil soaking up a bunch and that should have been a much bigger spike?”

Marty Ralph, the principal investigator on this project and director of the Center of Western Weather and Water Extremes said the station hopes to reduce uncertainty in seasonal runoff predictions and help build a better understanding of evapotranspiration, which is when moisture evaporates from soil into the air.

“The network will be critical to establishing a baseline for long-term monitoring of new trends in soil moisture expected due to greater evapotranspiration related to warming as our climate changes,” Ralph said.

Rossi said the deepest moisture measurements would be helpful when trying to forecast runoff for next spring, as the moisture
content is unlikely to change once the ground is frozen.

“It’s an indicator almost of the system momentum from season to season,” Rossi said.

When looking at data from last week, Muxworthy said soil moisture was pretty uniform, which is expected when the ground is frozen. If they were to see a spike in soil moisture, it would be an indication that things are thawing out.

The station tracks wind speed and direction, precipitation, snow depth, temperature, relative humidity, air pressure and solar radiation, in addition to soil moisture. There is even an instrument that looks at fuel moisture, which can be key in assessing wildfire risk.

Muxworthy said the location of this site was chosen for a variety of factors, but being on private land helped move things along quicker than having to get approval from the U.S. Forest Service. The network hopes to have stations throughout the valley in areas with different types of soil, vegetation and elevations.

Eventually, the Upper Yampa District hopes to build a public-facing dashboard that would pull data from these stations and measurements taken by other agencies together into one spot to be used by everyone, not just scientists and water managers.

“The biggest thing is filling in the gap in our decision making tools,” Rossi said. “I wish I’d have done it 10 years ago.”