On August 20th, 2018, fifteen-year-old Greta Thunberg sat alone outside her home city of Stockholm’s parliament building. She was missing school, but she had a purpose: “Skolstrejk för Klimatet” (School Strike for Climate). In order to bring recognition to the global climate crisis, she was going on strike from school. For the next month leading up to the Swedish national election, 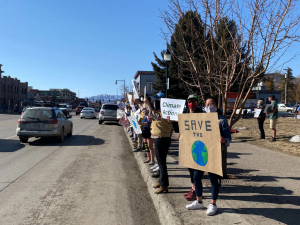 Greta stood outside the parliament building every school day, demanding that her government leaders take urgent action against the climate crisis. She was not alone in her efforts, other students and community members quickly began to join her. As her movement grew, Greta and her fellow protesters began the “Fridays for Futures” campaign. Its platform educated and encouraged more youth to get involved in climate action.

Over the next three years, her cause gained international recognition, and students around the world joined the fight for climate action, leading their own “Fridays for Futures” climate strikes.

For the second year in a row, the youth of Steamboat Springs have joined this movement and organized a local climate strike on the international “Fridays for Futures” day. On March 19th, students left school and stood on the courthouse lawn. They held signs, registered to vote, and petitioned our city council members to take action against the climate crisis. Adults in the community also came to support the cause, and various community members. Yampa Valley Sustainability Council’s Executive Director, Michelle Stewart, and Steamboat Springs City Council member Sonja Macys, spoke to the group of about 40 attendees.

In Steamboat, we live close to nature and can see the impacts of climate change firsthand. The youth in our community recognize its importance and the vital implications of climate change on the future. At the climate strike, students shared their voices using homemade signs, displaying messages such as “The Earth is Our Future,” “Stand for Our Land,” and “Love Your Mother.” These youth activists promoted climate action within the community as they stood by the street, waving their signs at passing cars.

Emi Cooper, a senior at the High School and organizer of the climate strike, spoke at the event, sharing her beliefs about youth action. She expressed that “Youth have power and passion, and we can continue to reverse the climate crisis through sustainable, meaningful action.”

Many other students shared their sentiments during the event, including Emma Poper, a student at Steamboat Springs High School. She urged other students to take action, stating, “Youth have a voice and we should use it, it’s our job to protect our future, and we need to get out there and do it.”

The youth of Steamboat recognize the urgency of our climate crisis and will continue to follow Greta Thunberg in taking the initiative. This youth movement will only grow stronger as we progress further and demand action from our elected representatives. As demonstrated by the youth-led “Fridays for Futures” climate strike, student activists see all too clearly the damage being done to our planet and are not willing to stand on the sidelines waiting for others to effect change.